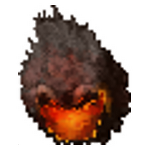 Ok, I'll have some small things before we can copy the code to tibiawiki.

It uses tibia sprites, I put sprites together in a logical way for me like this one: File:Citizen.png, For wikia I had to use "data:image/png;base64" notation for images because ajax calls can't load files from other domains.

The color table is a javascript array with r, g, b values copied from tibiaclient.

The image mix is like this: pink becomes transparent, and yellow, red, green, blue become head, primary, secondary and detail colors, after that, right side and left side are merged with multiply filter. I think tibia and tibiopedia use other graphic filter for merge the colors but I can't find which one and multiply looks almost the same(no difference to the eye), my color table had 1 mistake and it may have more so maybe that's why u noticed different colors from Outfits page.

Anyway, would be nice they allow tibia wikia to have this outfiter but I think they have a premium(paid) service for it so I don't think they want to, so no problem.

I read Template_talk:Loot again and made some tests on excel, I guess the changes can be done on the calculator so I will start testing --Daniel Letalis 00:24, January 16, 2010 (UTC)

I just made some other test uploads and it looks perfect. So, some answers/questions again:

There is a difference in quality between the images which are fit for tibiawiki, and the images which the outfiter produces. Therefore the outfiter's only purpose (as far as I can see) is to simply look how the colors you want look on the outfit you want. I hope you understand my point, otherwise just ask ;) Bennie 11:24, January 22, 2010 (UTC)

To really compare images you can generate them without "Soft Image", save them with right click, save image as, and open the image from wiki and saved image on an editor. 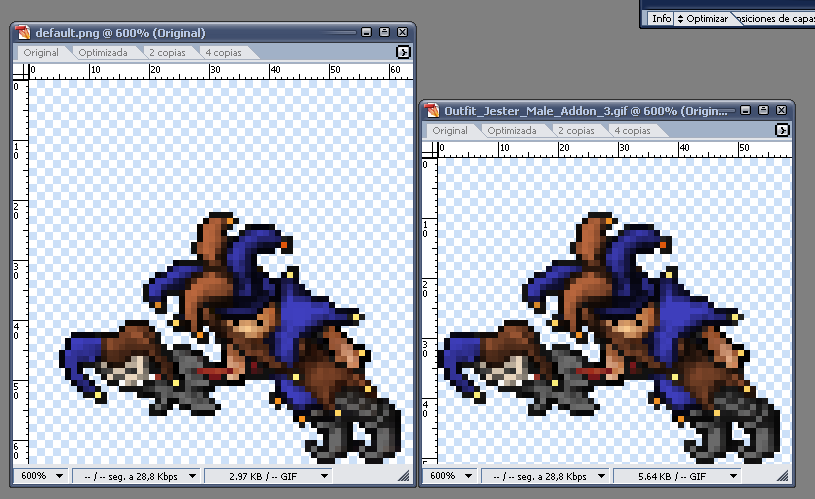 I attach my local copy of the outfiter in case you want to check, test or just have it, you just need to extract all files first.

Because of security at least Outfiter/Code should be never unprotected on tibia.wikia, MediaWiki:Common.js is already only admin editable and I think it would be better if all Outfiter subpages get protected too.


Chrome people fixed the bug that didn't allow chrome to run the Outfiter and now Chrome it's running it fine, I updated the code of Outfiter a bit to make it more like xhtml (used by wikia) instead of html.

I believe all files and dependencies for it are listed on User:Daniel_Letalis, it would be a lot of copy paste so if u want u can only add and protect Outfiter/Code and the portion for outfiter in MediaWiki:Common.js and I can add the rest, then u protect the rest, or if you want you can copy paste all, just please remember to protect at least Outfiter/Code because it has javascript code that is loaded and we don't want wrong people to be able to edit it. --Daniel Letalis 00:35, January 26, 2010 (UTC)

Ok, I will copy paste the code right away and see if it works. About protection, from some point of view it would be better to protect as few pages as possible, so users can edit as much pages as possible and just hope the world is not that bad :P But I can imagine with javascript you can't only put a hack link but also let users auto download files (?) or such nasty things, so I will protect that fully and semi-protect the rest. <cross fingers> hopes it works, you will see in a sec.

EDIT: I put it on, it shows the outfiter for me, but gives an alert my browser is not compatible (never showed this before), I use Firefox/3.5.7 so... Did you change anything which might have caused this?

I will check the issue when I have time. About protection, the level of protection u choose is ok as long as Outfiter/Code is fully protected. --Daniel Letalis 16:50, January 26, 2010 (UTC)

I debugged javascript and I believe I fixed it, only file changed is Outfiter/Code, try to update it on tibia.wikia

I replied again, after some time, here, sorry for getting impatient... Let's just stick to the version where you can input your server log, see the output in the format of the current Template:Loot with the only addition being the version parameter and the ability to upload the statistics to the correct page. If you can make a list of the pages I need to copy to tibiawiki, that would be totally awesome :) (maybe click on history and the older revision which was correct). ^^ Bennie (talk ~ fellows) ^^ 18:53, February 23, 2010 (UTC)

I was impatient too so I decided to play with the proposed format here and I can't find any backup/note about the revisions of the old format, I'm changing the new parser so it outputs as the old format, I already finished and it's perfect, I only need to finish the loot merger. Performance is a little bit better now because I wrote more functions of this parser in JS instead of copying them from php. I let you know here and on the other page when I finish. --Daniel Letalis 16:05, February 24, 2010 (UTC)

I won't touch files now until loot parser is copied to tibia wiki, you can see files list here: w:c:dantest:User:Daniel_Letalis

It is working on all browsers on dantest and you copied it fine, it is working on chrome, opera & safari on tibia.wikia, I believe the problem is a wrong security problem in firefox with google ads, I will try to workaround this later. --Daniel Letalis 19:42, February 25, 2010 (UTC)

Love it! Thank you. :) Good job I have opera, one thing about the firefox google ads thing. I have Adblock Plus, even when I disabled it it didn't work so I take it that this has nothing to do with it? beejay 20:57, February 25, 2010 (UTC)

Currently item sorting is used because Temahk used it on last version of his parser but it can be changed easily.

Loot parser is loading now on tibia.wikia for me on latest firefox, also Outfiter is working again.

When the parser adds loots it sorts them again, so it will be no necessary to change sort manually in the tibia.wiki statistics pages, I already changed sort to amount sorting but it is not fully tested, I will post here after I test it.

You have been around for some time on tibiawiki, you did a lot of nice stuff and are trustworthy as far as I can tell. When I asked Beejay to become administrator I also considered you but I thought to wait for a bit longer. But now the time has come, would you like to apply for TibiaWiki administrator? It will also remove the need to ask us to update code on protected pages, which must be annoying for you sometimes. So, just let me know what you think :) Bennie - 07:29, May 25, 2010 (UTC)

Took me some time to answer because it was a little bit unexpected, I've been thinking about times and I think it is possible and it would be very nice for me to be and admin in tibia.wikia. Do I have to apply according to TibiaWiki:Helpers page? --Daniel Letalis 00:28, May 26, 2010 (UTC)

Not a problem at all, you can test and even delete everything you need here.

Retrieved from "https://dantest.fandom.com/wiki/User_talk:Daniel_Letalis?oldid=12952"
Community content is available under CC-BY-SA unless otherwise noted.